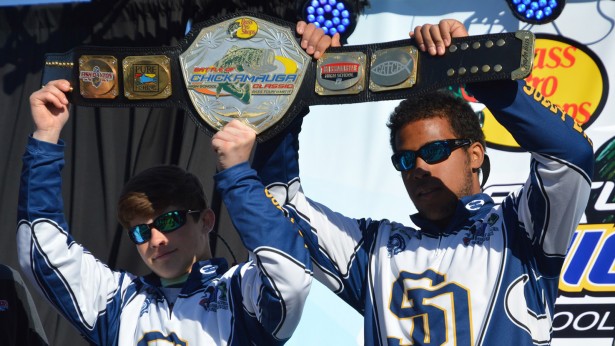 DAYTON, Tenn. — Anticipation continues to grow as Bass Pro Shops’ Battle of Chickamauga High School Classic presented by CATCH Ministry draws near in Dayton, Tennessee.  On March 11-12, anglers from around the country will converge on Lake Chickamauga for what has quickly become one of the most exciting high school events in the nation.

Tournament organizers at Fish Dayton and the many sponsors supporting the event, have spared no expense in creating a once-in-a-lifetime experience for high school anglers who can expect everything from an actual cannon firing during blast-off, a championship belt, and weighing in on a full concert stage equipped with “hot seat”, music, and LED lighting.

Strader, who opened 2016 with a Bassmaster Southern Open win on Lake Toho, says he’s honored to speak to the next generation of anglers and looks forward to sharing his secrets of “How to obtain and pursue goals in fishing and life.”

Rising-star Nicole Jacobs, who is traveling from Minnesota to speak at the event, says, “I’m thrilled to be part of the Battle of Chick and to offer advice and empower our high school teams to set goals and strive to achieve them.”

Resident Lake Chickamauga expert Michael “the Real Deal” Neal will also be on hand to field questions and share latest trends and techniques.

TWRA Biologist and Fisheries Management expert Mike Jolley says the biggest attraction may likely be the lake itself.

“Lake Chickamauga is currently producing more trophy-sized bass than any other reservoir in Tennessee,” said Jolley who noted a 48-pound stringers and new state record.

Keen, always excited to return to his home lake, says he’s bringing 12 teams to compete in this year’s event.

“I was born and raised on Lake Chickamauga, and it’s always held a special place in my heart – even before I broke that record.”

Jolley and Keen both admit, with the tournament falling on Lake Chickamauga’s pre-spawn, it’s a perfect opportunity for anglers to catch a trophy of their own.

“We expect a lot more trophy bass.  I wouldn’t be surprised if I get a call with the next state record,” Jolley said.

To the Winner Goes the Spoils

Fish Dayton director Dennis Tumlin says a high school tournament of this magnitude is only possible with the support of industry giants such as Bass Pro Shops, Abu Garcia, Berkley, and B.A.S.S.

With Bass Pro Shops as the title sponsor, youngsters will be competing for a top prize that includes a $1,000 scholarship for the winning team, as well as Bass Pro Shops gift cards.

The winning team will also earn an automatic spot into the Bassmaster High School National Championship later this year.

It took a 32.59 pound stringer by Soddy Daisy’s Elijah Cartwright and Jacob Thomas to store the belt in their school’s trophy case.  Will Soddy Daisy be able to defend their title? How much will it take to crown this year’s champion?

These questions will be answered on March 12, but regardless how you finish, Keen says, “For anglers to have the opportunity to be able to meet pro-anglers like Strader, Neal, and Jacobs – it’s gonna be a great experience.”

Register or learn more about the Bass Pro Shops Battle of Chickamauga here. Learn more on their Facebook page or by contacting Dennis Tumlin with the Rhea County Economic and Tourism Council at 423-775-6171 or dennistumlin@rheacountyetc.com.